Kolkata: The City of Diversity

“You don’t see these everyday back home.”

If you’re at least a little bit like me, then seeing symbols like these brings a smirk to your face, because you now the attributed meaning they have in Europe. These are a very rare sight back home and even more rare would be to see them on the same day or the same city, for that matter. But there is at least one place in India where these symbols are widespread and in this post I shortly explain why.

Yup, you’ve guessed it – this symbol is the mark of Communism.

It holds exactly the same meaning as the symbol used in Europe a long time ago. It is seen everywhere in Kolkata, because this is the city where the longest running Communist Party (CPI)  in the world was founded in 1964. For over 20 years the party held the majority in the West Bengal government and in fact it was running for so long that they even had relations and a strategic partnership with the Soviet Union.

The symbol can be mostly found in a form of basic grafitti on walls all over the city, but mainly the suburbs.

Right now you might be thinking about guys with shaved heads and tattoo’s – sorry, but this time you’re wrong. Very wrong.

In India, this symbol has nothing to do with Nazism or Adie, the Austrian who went to Germany. To people who have been raised here, this symbol brings up completely different associations. In India and China this is a symbol of Hinduism, Budhism and even the literal meaning of the word “Swastika” in Sanskrit is “to be good”.

People use this symbol as a decoration for their homes and it can be seen in small cafes or restaurants.

So there you have it – in different cultures some symbols have completely different meanings. I’ve decided to start collecting pictures of these two and putting them into this post, but for now, only if someone could help me figure out the meaning of this: 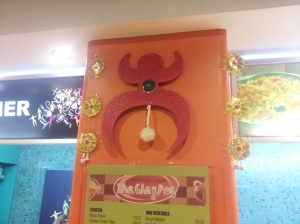 2 thoughts on “Kolkata: The City of Diversity”